When you have a blog called “Guns and Barbells” and then you hear about an event that incorporates both guns AND barbells, well, the fact of the matter is that you absolutely must attend!

I found out about The Tactical Games about 10 days before the event, via a friend’s Facebook post. I haven’t shot a match since fall 2015, when I stepped away from 3-gun, so I wasn’t sure how well this would go. But heck, why not? Adventure!

What are The Tactical Games, you ask? Well, I’d like to think that CrossFit and Spartan Race had a baby, and that chubby little newborn came out guns blazing! In their terminology, The Tactical Games is “CrossFit-meets-combat” and seeks to crown the “Most Dangerous Man/Woman in the World.” It’s running, and climbing, and carrying heavy things, all while wearing a weight vest – and then trying to hit a target while your heart is exploding in your chest. In short, it is this girl’s DREAM!

The downside about discovering the event 10 days out is that I didn’t really have any time to prepare. I borrowed the 5.11 TacTec plate carrier with Rogue laser cut plates from my gym, Trident CrossFit. The combination gave me 14# total weight, which was more than the required 10# for women, but it was very easy to adjust the fit and was quite comfortable as far as plate carriers go. I did like 5 minutes of dry fire and a few reloads with my trusty FNS-9. And since the match did not allow magnified optics, I quickly cobbled together my FN-15 AR with the Burris FastFire3 red dot and Magpul backup irons and sling. One short trip to the indoor range to get a 50-yard zero, and I was in business.

The benefit of finding out about the event late in the game is that I didn’t have much time to stress – and there were plenty of things to stress about! Three years have gone by since I shot a match, so to say I was rusty is an understatement. In all my years of CrossFit, I’ve never actually worked out in a weight vest. And when was the last time I slung a rifle with body armor? At about a quarter to never. Shoot with your heart rate at 172? Nope, never done that either. Oh, and did I mention I didn’t know anybody who was going to be at this event? New experiences were going to abound and I couldn’t control any of it.

So I did the one thing that has never failed me in all my years of match prep – I baked. This served two purposes: first, baking calms me down. There is something Zen-like about following the precise formula of the recipe in a neatly ordered process. But more importantly, EVERYBODY LIKES THE GIRL WITH THE COOKIES! It’s my tried and true tactic for making new friends at the range. Works every time!

I packed up the Subaru and headed south to The Range Complex in Autryville, NC, just outside of Fort Bragg. I was way overpacked. As an old friend taught me in my early days of 3-gun, “Pack for the crash, not for the ride.” I had guns, ammo, med kit, water, a ridiculous amount of food, and enough changes of clothes to outfit a baseball team. If we needed it, I was going to have it.

I arrived early Saturday morning and surveyed the stages as the crowd began to trickle in. It was a very small event – only about 30 competitors total between Women’s, Men’s Elite, and Men’s Intermediate divisions. But this was only the second Tactical Games, and the first event with a Women’s division, so it was cool to get in on the ground floor.

I quickly found my fellow female competitors, and couldn’t have asked for better ladies to compete with – they were friendly and drama-free, and we shared advice and recommendations on gear setup, rope climbing techniques, and rifle aiming points. I was the oldest of the bunch by a handful of years, and had the most competitive shooting experience by far. But what the younger ladies lacked in experience, they made up for in physical fitness, as this old lady sometimes struggled to keep up! 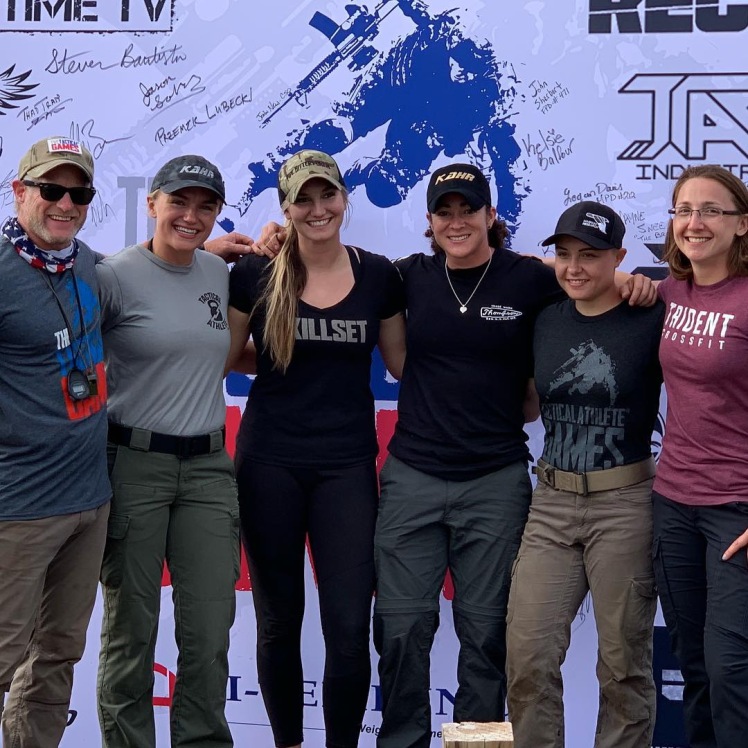 The event began with the National Anthem, followed by a safety brief. Then we walked through each of Saturday’s stages together as a group, which provided an opportunity for us to ask questions about the events and also to get our minds right regarding the pain that was surely ahead!

Stage 1, or “battle”, was called The Horrigan. It featured sled drags and sprints in between strings of pistol shots. Battle 2, The English, included rope climbs (with burpee penalties if you failed), Husafel stone carries, and rifle shots. (BTW – have you ever climbed a rope in body armor with a slung rifle??  It’s special…) Battle 3, The Pope, featured rollover prone rifle under a barricade, a sprint, some pistol shooting, some more running and climbing over a lot of walls (which I suck at), and then you had to find your “terrorist” inside the shoot house and make sure you shot the right target. Oh, and then you got to climb back over all the walls, and run back to the original barricade and shoot some more rollover prone. Don’t forget to breathe!

Day 2 began with Battle 4, The Connor. Remember that rollover prone? Hope you learned where to hold to actually get your hits, because we got to do it again. And then we got to crawl under a truck, and climb over those walls again, all while farmer’s carrying a giant jug of water between the obstacles. Battle 5, The Langmack, should have been titled The Marathon, because that’s what it felt like. The event opened with a quick sprint to some rifle targets, and then you slung that bad boy and set out on what was supposed to be a 3.2-mile run. Google Earth was a liiiiiiittle bit off, because my Garmin came in at 4.96 miles. (Did I mention I don’t run??) Anyways, in the middle of that event, you had to unlock a box using a 6-digit number you were provided right before the stage began; the box contained the identity of the “terrorist” you needed to shoot at the end of the battle. Finally, after we regained our souls, we concluded the weekend with Battle 6, The Benevidez. This final event was an all-out sprint featuring barbell-size farmer’s carries, a weighted wheelbarrow, and the return of the Husafel stone, combined with rifle and pistol. It tested all your fitness and shooting skills at once. This was my best (and favorite!) event! 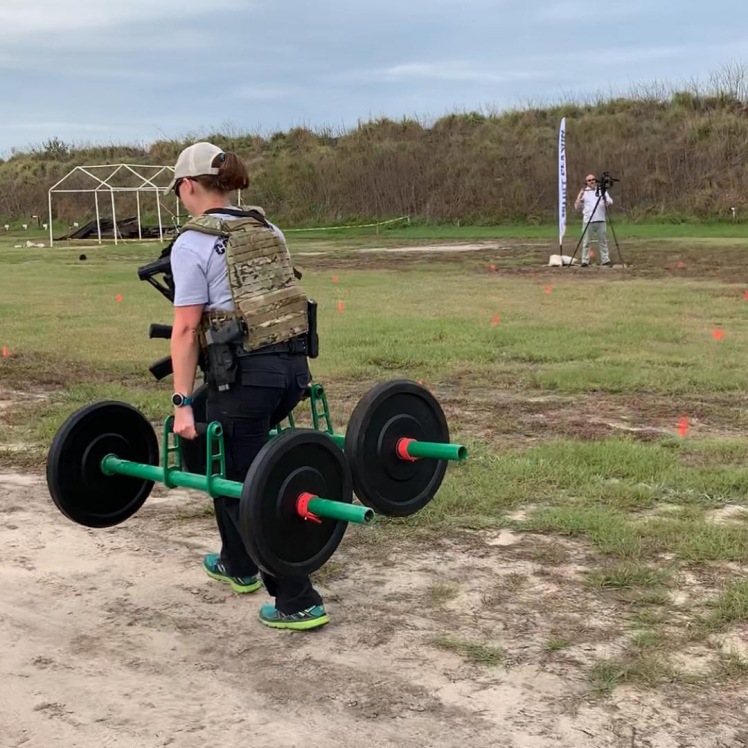 The events were hard, but not unattainable. Weights were manageable, and movements could be scaled (with penalty) if you couldn’t do them. The targets were mercifully large and relatively close, but that didn’t mean they were easy – elevated heart rate is a game changer.

I managed to squeak out a second-place finish by three seconds, and was fortunate to take home a Desert Eagle .44 Magnum provided by Kahr Arms, along with possibly the coolest trophy I’ve ever received. Brownell’s provided all the competitors with free T-shirts, and I also snagged a shirt and talked about kettlebells with Tactical Athlete. But more importantly, I left with a smile on my sunburned face, a bunch of new friends, and a renewed love for the shooting sports. I’ll definitely compete in The Tactical Games again, and maybe actually train next time! You should come play too!

PS — Be on the lookout for videos from Recoil Magazine and Trigger Time TV, both of which covered the event!